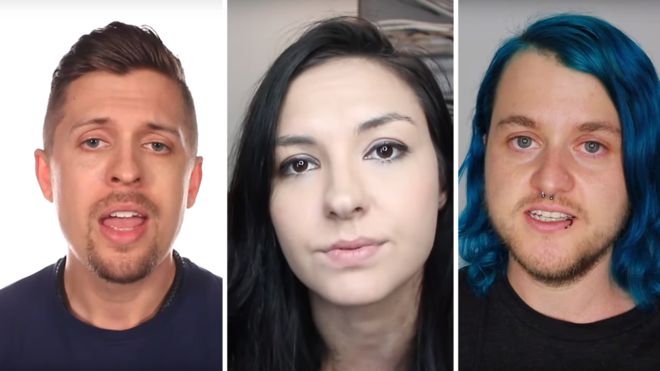 A group of YouTube video-makers is suing it and parent company Google, claiming both discriminate against LGBT-themed videos and their creators.

The group claims YouTube restricts advertising on LGBT videos and limits their reach and discoverability.

But YouTube said sexual orientation and gender identity played no role in deciding whether videos could earn ad revenue or appear in search results.

A group is hoping a jury will hear its case in California.

The legal action makes a wide range of claims, including that YouTube:

It was filed by a group of video-makers from the US, including:

The legal action also claims Google refused to let the creators of a show called GNews! advertise their program, because it contained “shocking” content.

In a phone call heard by BBC News, one Google ad representative told the program’s producers that “sexuality content about the gays” broke its advertising rules.

YouTube said it did not discriminate against LGBT video-makers.

“Our policies have no notion of sexual orientation or gender identity and our systems do not restrict or demonetise videos based on these factors or the inclusion of terms like ‘gay’ or ‘transgender’,” spokesman Alex Joseph said.

“In addition, we have strong policies prohibiting hate speech and we quickly remove content that violates our policies and terminate accounts that do so repeatedly.”

YouTube said it had removed 220 million comments in the first three months of 2019, 99% of which had been detected automatically.

And it had removed more than 3,000 channels for publishing hate speech.

YouTube’s advertiser-friendly content guidelines do not prohibit the discussion of LGBT themes.

However, videos discussing sexual experiences, sex toys and devices, and fetishes are not allowed to carry ads.

The company accepted its automated systems did make mistakes when deciding whether to exclude a video from advertising but said video-makers could appeal against automated decisions.

In the past, YouTube has not always explained exactly why specific videos have been excluded from advertising or flagged as “unsuitable for all audiences”.

The lack of specific information has frustrated video-makers from all walks of life. The phenomenon was even given a nickname: the ad-pocalypse.

YouTube says it does not discriminate against LGBT themes, and it is easy to find popular LGBT channels on YouTube that do carry advertisements.

However, YouTube’s ad-placement and content moderation decisions are mostly made by algorithms, which can struggle with the intricacies and nuance of human life.

YouTube does not place ads on videos about sex toys, as per its policies. But can its algorithms tell the difference between a “marital aid” and a prosthetic penis designed for a transgender man?

If the group gets its case in front of a jury, YouTube may be under pressure to provide more clarity about how its algorithms work.